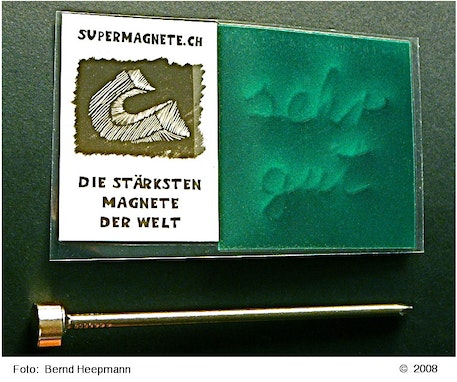 Flux detector as data storage
Source © Heepmann
Store memory magnetically? That makes many think about tapes and disks in the first computers. But they are long gone. Today, we use USB flash drives and memory chips. Alright. But there are still many magnetic storage media, some of them in every household: And many data experts even claim that the life spans of data tapes and hard drives clearly beat those of self-burned CDs and DVDs.
That's why it's worth spending a few minutes on magnetic data storage. How does it actually work?
When I held the "flux detector" from supermagnte in my hands for the first time, I instantly had the idea that it could help make the magnetic recording and erasing easily understandable.
Material for the experiment:
Execution of the model experiment: The magnet will be attached to the nail head. The flux detector Flux Detector laminated is already laminated to protect against scratching. The type Flux detector small should be placed under a foil and on a white sheet of paper. With the nail point you write data (characters, words, etc.) on the detector. The data is best legible with a sideways exposure to light (see picture). The written data remains legible even after you remove the nail. Mechanical tremors don't influence the legibility at all. The data can be erased when you move the nail flat over the foil. Magnetic particles on a data tape
Source © EMTEC, Willstätt
Why a model experiment?
Models help us understand, although they never reflect reality exactly.
That's also the case here:
Maybe you want to surprise your friends with this easy experiment and your natural science knowledge... 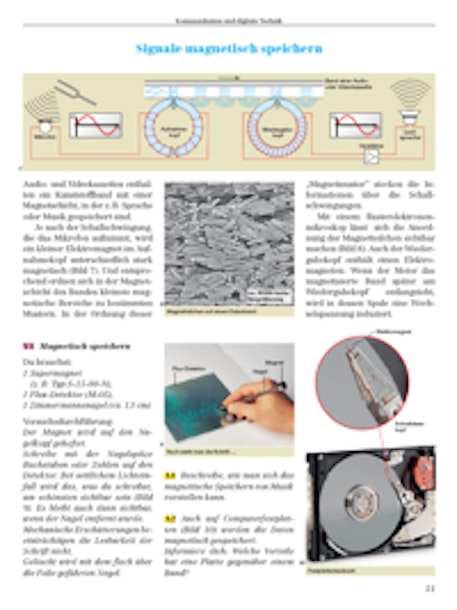 pdf file
You can find more pictures on this topic on the page of a schoolbook for elementary and secondary schools in Baden-Wuerttemberg, which you can download here at no charge and with the kind approval of Cornelsen publisher.
Reference for the schoolbook: Heepmann, Bernd u. a.: Materie - Natur - Technik, Band 6. ISBN 978-3-06-085040-2 © 2008 Cornelsen Verlag, Berlin. 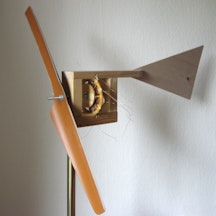 Spheres in a circle 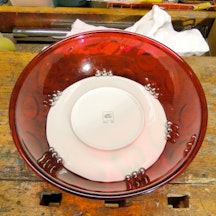